New Theme! What do you think?

Study, speak, and hang out with fellow Elvish students!

Learn to write in Sindarin.

Put your Elvish skills to use. 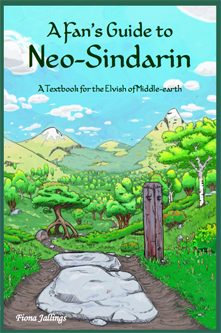 Enchanted with Elvish? Delve into the Elven tongue of Middle-earth, into Sindarin’s long and winding past in our world and theirs, and into the culture Tolkien dreamed up for its speakers.

This is Neo-Sindarin, the descendant of the language featured in The Lord of the Rings and The Hobbit movies, the language as it has flourished on the Internet using Tolkien’s creation as a road-map. This book functions as a friendly introduction to the Neo-Sindarin community for beginners and non-linguists. Included is the most current information available to fans.

Within explore Neo-Sindarin academics, learn simple linguistic concepts, practice useful phrases while studying grammar, and look at the world through Elven eyes: from how they count on their fingers to how they organize the cosmos. Govano ven! (Join us!)

If you write a review of the book, let me know and I’ll post it here! Reviews really help, especially for people who are new to the community and don’t know who or what to trust yet.

For the Second Edition

I’m compiling a list of changes that I’m planning for the second edition of the book. If you have any suggestions for features, read this page first!

A Fan’s Guide to Neo-Sindarin